SOER 2020 – the launch event in Brussels

On the 4th of December 2019 in the Europa Building in Brussels, the seat of the Council of the European Union, the official launch of the European Environment Agency report ”The European environment – state and outlook 2020” (SOER 2020) was held. Conclusions of the report and the European Green Deal targets formed a leading topic of the addresses. The event was attended by the CIEP representatives.

Poland was represented by: Mr Paweł Ciećko - Chief Inspector of Environmental Protection as the EEA Management Board member, Ms Anna Katarzyna Wiech - Head of the Departament of Environmental Monitoring and the Alternate of the EEA MB member, Ms Małgorzata Bednarek – the EEA/EIONET National Focal Point, working in the same Department. 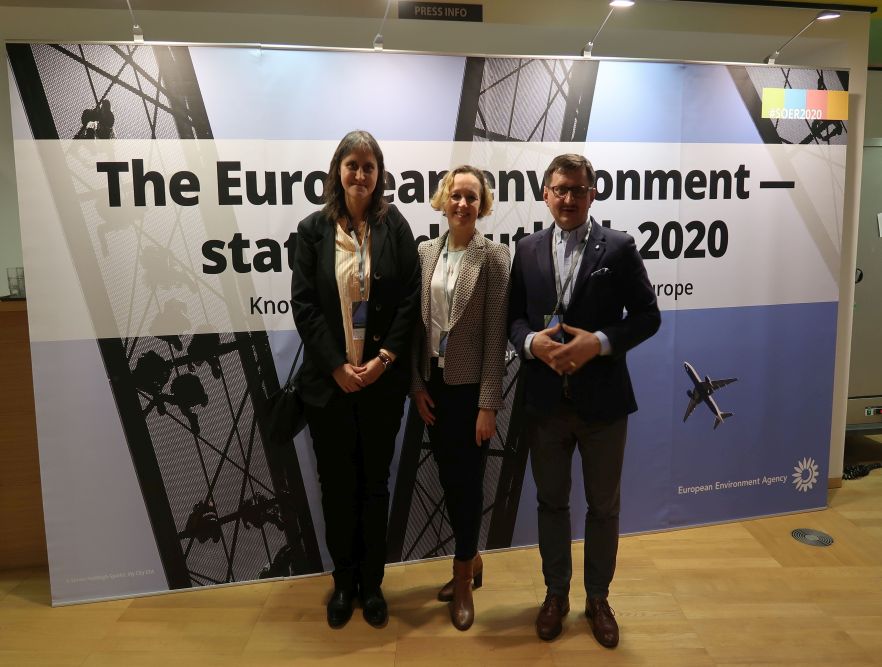 The event was opened by Ms Inga Rosińska, Director of Information and Outreach in the General Secretariat of the Council of the EU. She referred to some examples of environmental problems covered by the SOER 2020 when talking about the need for appropriate actions. She emphasized a timely moment of the launch with the new Commission starting the work with ambitious European Green Deal. Drawing attention to the danger of the growing number of fake news she encouraged the audience to pass the message on the reliable SOER 2020, using also the smartphones, so popular now.

Next Ms Terhi Lehtonen, State Secretary to the Minister of Environment and Climate Change, Finland’s Presidency of the Council of the European Union, directed the attention to the key challenges in environmental policy and the role of EIONET in providing up-to-date and reliable information. She highlighted the Presidency priorities referring inter alia to the circular economy, chemicals, the need for better alignment to other policies, including inter alia the agricultural one. She stressed that systemic challenges called for immediate actions. 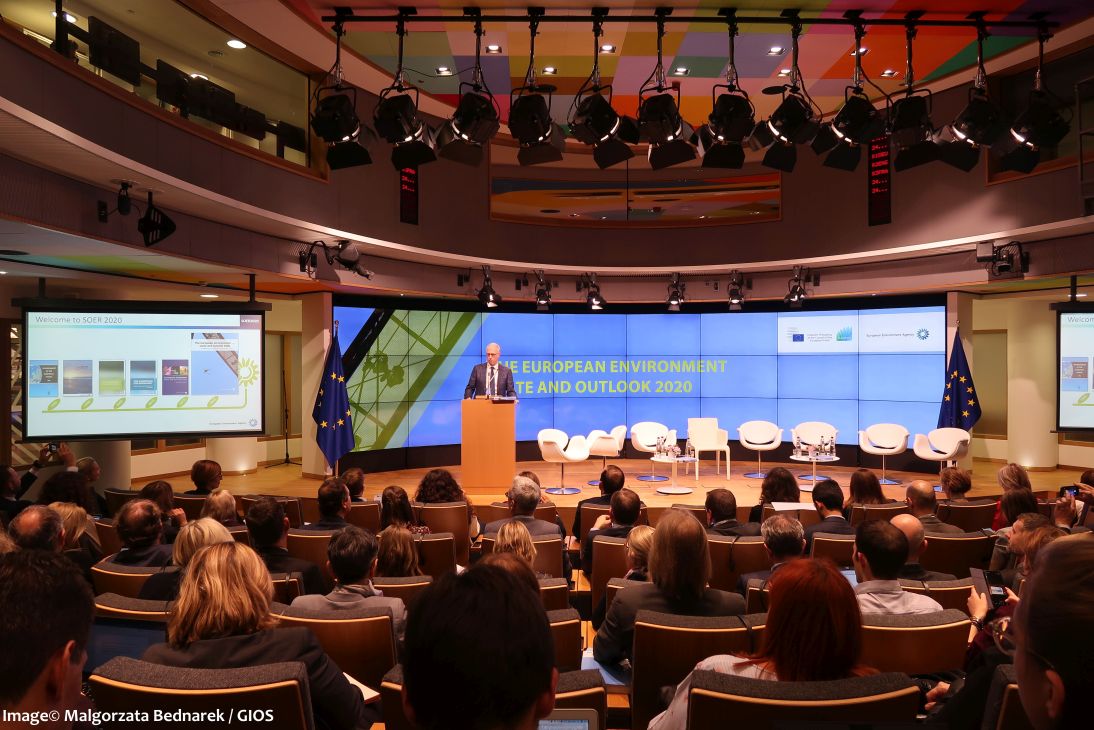 The key address was the presentation of the SOER 2020 made by Mr Hans Bruyninckx, the Executive Director of the EEA. When describing the global context, covered by the first part of the report, he stressed the critical moment calling for urgent actions. The other significant reports of other organisations - on climate (IPCC), biodiversity (IPBES) and on circular economy (IRP) – were mentioned. Following the structure of the report, the Executive Director (ED) presented key conclusions, one after another, resulting from the analysis of the state of individual environmental components and pressures coming from economic sectors as well as past trends and projections [you are invited to see the SOER 2020 results here as well as directly in the Executive Summary and the full report]. In the summary it was said that despite some successes the outlook showed negative future which means that Europe had not addressed systemic pressures. The EEA summary table shows past trends, outlooks and prospects of meeting policy objectives/targets. The worrying trends for the environment place human health and well-being in danger.

In this context the ED got down to the presentation of the solutions proposed by the EEA. He referred inter alia to the need for the policy alignment and integration, to the transition challenges with the risks of trade-offs, to the need for new solutions in the new digital world, to the need for the situation analysis and planning in a systemic way, taking into account inter alia the food, energy, mobility and built environment systems, and addressing key policy gaps. It was noted that the required systemic changes could be costly and lead to the break-down of some sectors but the better future required taking the risk, undertaking the trade-offs better and be explicit what we were to stop doing. At the end the ED pointed out four key urgent actions: implementation (we should do things better), sustainability as the guiding principle (we should do things differently), right investments (for transformative changes) and fostering innovation. 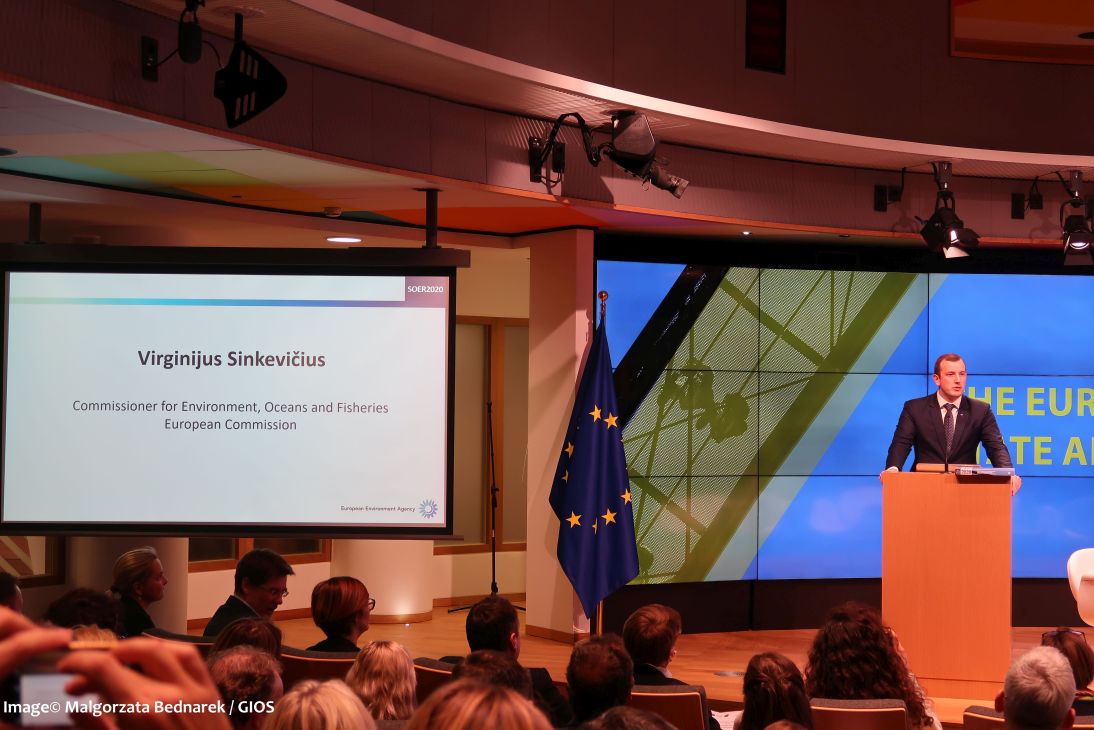 The second part of the event was dedicated to the policy responses towards the European Green Deal. The speeches were given by Mr Virginijus Sinkevičius - Commissioner for Environment, Oceans and Fisheries, European Commission; Mr Pascal Canfin - Chair of the Committee for Environment, Public Health and Food Safety, European Parliament; Ms Emma Navarro - Vice-President of the European Investment Bank. The Commissioner V. Sinkevičius assured that each Commissioner would receive the SOER 2020 report and his objective would be to turn all the red in the report into green and blue (to achieve targets for good environmental status and related human well-being). He inter alia mentioned his priorities referring to biodiversity, circular economy, (zero) pollution. Mr Canfin particularly emphasized the need for a total change in doing the things but noting the time required for it. One of the key issues Ms Navarro referred to was sustainable finance and climate policy and it was said that the EBI would not support any energy project on fossil fuels. 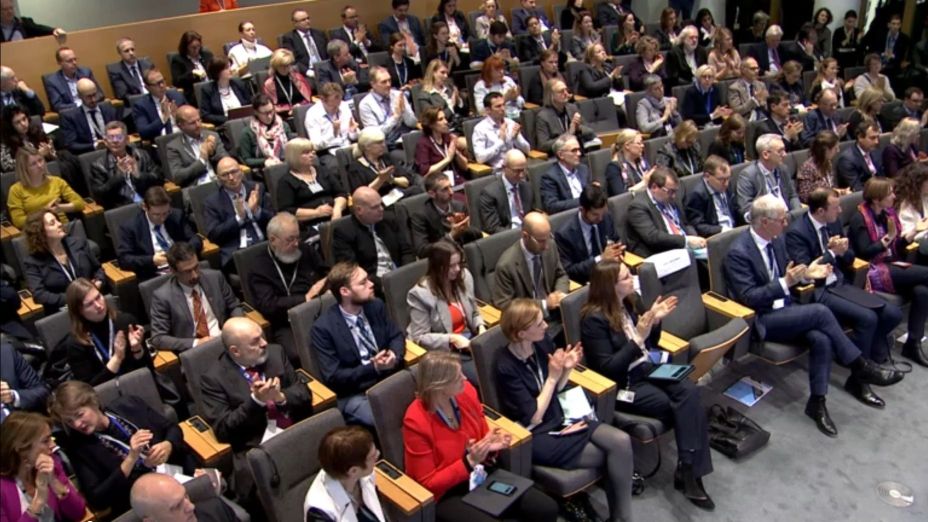 The third part of the event was the panel debate with the above mentioned representatives of the EP and EBI as well as Mr Jarosław Pietras - the Director-General for Transport, Energy, Environment and Education, General Secretariat of the Council of the EU; Ms Laura Burke – Director-General of the Environmental Protection Agency, Ireland and Chair of the EEA Management Board, Mr Mauro Petriccione – Director-General, DG Climate Action, European Commission, Ms Ester Asin – Director, WWF European Policy Office, Chair of Green 10; Ms Joanna Drake – Deputy Director-General, DG Environment, European Commission. The participants emphasized inter alia the unprecedented speed of changes in the world, their systemic nature, the need for co-creating the policy together and doing things differently, better, for people and with people, the need for making rules that people want to respect, convincing those that resist, using the commonality of values as the environmental degradation affects all. 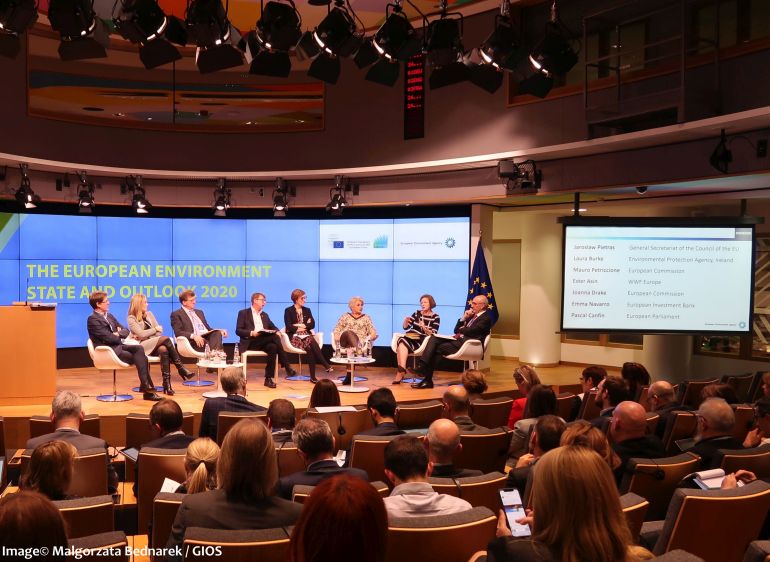 The conference was concluded by the speech of the EEA Executive Director who inter alia emphasized the key objectives of the report such as informing, monitoring and leading to the needed change, and thanked EIONET for the input.